Welcoming the New Year with the Big Hearts Fund (and Pets)

It is a new year. 2014. All shiny and keen with possibility. At BHF, we are reflecting on our hopes for the new year and imagining our pets’ New Year’s resolutions.

Q: What are you, your family, and/or your pets looking forward to in 2014?

Christy: Our pets are all looking forward to nicer weather next July, when it finally stops raining in Seattle! None of them like to be sprinkled on, and all of them like to play outside.

My husband, my daughter and I are all simultaneously dreading and looking forward to our home remodeling project, which will begin and end in 2014!

Des: I think the cats are looking forward to not having to move ever again, so far as their conception of time goes. I’m looking forward to some time to relax after a thoroughly busy, borderline hectic fall. And getting books in shelves and art on walls.

Kaitlin: Spending time in Michigan with the whole family, running around and exploring the beaches and parks! 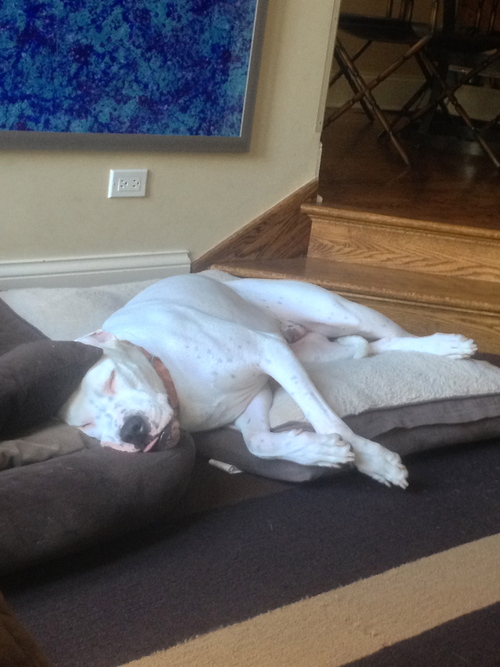 Katie: We are looking forward to welcoming home a new baby this spring, just in time for lots of family strolls in the park and cookouts in the backyard!

Laura: My pet is a Siamese named Shumai (after the small Asian dumpling, which he resembled when a kitten, but he is now huge). He is most looking forward to the opportunity to hunt more feet and mice in the new year.

Melissa: For this upcoming year, we are looking forward to spending more time together as a family. With Roscoe [a puppy] new to us (adopted in October), we are looking forward to learning more about one other and communicating better. One of our goals this year is to spend more time exploring the world and we would like to include our dogs in this as much as possible. 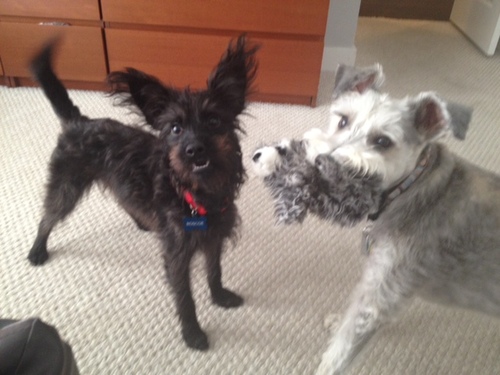 Charlie and Roscoe having a blast

Alanna: Bella Donna, my house’s cat, looks forward to sitting in the sun and avoiding my friends. I look forward to relaxing as well, but I’m also very excited to be building on all the great opportunities that came up at the end of 2013.
* *Q: If your pet or pets had a New Year’s resolution, what would it be?

Melissa (whose pets are two dogs: Charlie, grey, and Roscoe, black): Charlie’s resolutions for this new year would be for him to be more patient and tolerant of his new younger puppy brother Roscoe. He would also like to strive to receive more snuggles from his humans-because he can never get enough and he has a daily required amount of snuggles that he needs. 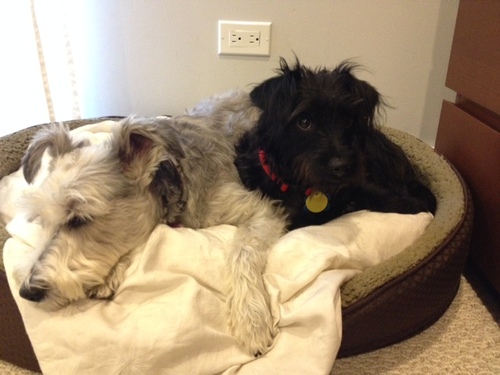 Charlie and Roscoe, all tuckered out

Roscoe’s New Years resolutions would include the goal of not chewing on any more baseboards and furniture in the house. He would also like to spend more time sneaking into mom and dad’s bed after they fall asleep and curling up between them.

Christy (whose pets include a yellow lab named Lucy, a cat named Halifax, and a cat named Sgt. Pepper): Lucy’s New Year’s resolution is to try to be a better leash walker… although this is probably more a resolution for me to more consistent in my training efforts!

Halifax resolves to bring in more dead birds, much to the dismay of everyone else.

Sgt. Pepper resolves to hiss at everyone less… at least I hope so.

Des (whose pets include a black kitten named Farious and an older orange cat named Beastie): Farious probably doesn’t believe in resolutions, but she might come up with something like forcing the humans to stop spraying her when she’s just trying to eat a plant. Beastie’s might be something on the order of stop Farious’s terrorism.

Jax (Kaitlin’s dog): [My resolution is to] finally catch that stupid squirrel that lives in our backyard. He keeps teasing me.

Lulu (Katie’s dog): Convince mom and dad to install a doggie door so I can have unlimited backyard time!

Laura: [Shumai’s] new year’s resolution is probably to continue his staunch defense against bears, for which he had a 100% success rate.

Bella Donna (Alanna’s feline housemate): I resolve to tackle my vacuum-phobia so that I can clean up when I shed

What would your pet resolve to do this year?