Until several months ago, I was owned by two senior Chihuahuas – my Maggie and Molly. Sadly, Maggie passed away in April due to complications resulting from IBD. Both Molly and I were devastated. Until the day Maggie died, Molly had never been alone a day in her life. Molly has suffered from a seizure disorder most of her life, and the stress of losing Maggie exacerbated it. After a period of intense mourning, I began to think the best thing I could do to honor Maggie’s memory and to help Molly was to adopt a Chihuahua in need of a good home.

I found Melanie in an online listing where her previous owner said she just didn’t have time for her. Melanie looked so scared in her photo, and it broke my heart to see the terror in her big, brown eyes. 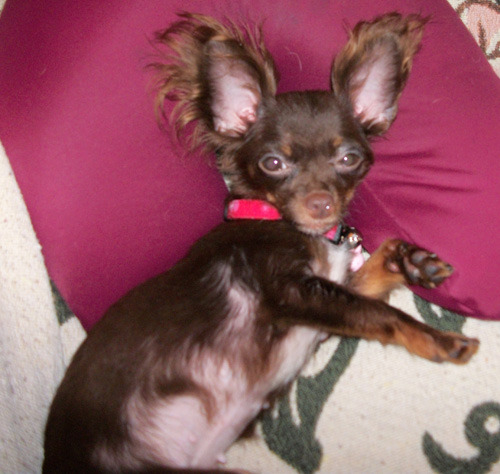 At 18 months, she was a little younger than I was looking for, but I couldn’t resist the Grandpa Munster hair on her ears. I made arrangements to pick her up, and on June 21st I brought her home. She was so frightened; she hid under my bureau for most of the night. Finally, seeing Molly on my lap brought her out of her hiding spot.

It’s when I picked her up and cuddled her against my chest that I first had an inkling that something was wrong with her. Rather than a nice thumping heartbeat, I felt a continuous whooshing vibrating through her chest. I took her to the vet the next day and got some awful news – Melanie had a grade 6 heart murmur on a scale of 1 to 6. X-rays showed significant heart enlargement, and the vet said congestive heart failure and death would occur in weeks or months. She recommended I take her to a veterinary cardiologist for a more detailed consultation and prognosis and to see if there were any medications that could prolong her life.

One week later we were at the cardiologist’s, who diagnosed a congenital heart defect called PDA, patent ductus arteriosus. My elation at hearing it could actually be corrected with surgery was quickly dashed when he mentioned the cost – anywhere from $3,500 to $5,000. I went home in tears because although I now knew there was a possible cure, I knew without a doubt that I did not have the money for the surgery, nor would I have much time to save up because Melanie needed the surgery in the next few weeks.

Most dogs with PDA die before the age of 12 months. It was already a miracle that she was still alive at 18 months old. I feared I might have to just allow her to live out her very short life and make it the best I could for her. I quickly decided I couldn’t just give up and as much as I didn’t want to, I asked friends and family if they could help out for her sake. I also began a frantic search for financial aid. I applied to several societies that offer assistance to pet owners who cannot afford vet bills. They were all very kind and responsive; however, I was told that with the difficult economy, donations were down and they were unable to help. One of the societies recommended I contact the Big Hearts Fund, which I did via the online form.I heard back almost immediately from Laura, who told me she would be handling my case. She was wonderfully patient and helpful in walking me through the application process.

The Big Hearts Fund was my last hope. When I heard I had been approved for a grant, a huge weight was lifted from my shoulders! The very next day, Melanie was scheduled for the procedure. I’m thrilled to say she is lying beside me on the couch as I type this (she is not so thrilled to be wearing an e-collar to keep her from chewing at her stitches!). She is already like a new dog. I went from thinking this poor little puppy was going to be dead in a few weeks to the cardiologist telling me she now should have a normal life expectancy!

Words cannot express my appreciation and gratitude to the Big Hearts Fund and its supporters for making this miracle possible. I’m so incredibly touched that a group of strangers would help me and my dog. You’ve made a huge difference in my life, but you GAVE life to Melanie. Thank you from the bottom of my heart.

You are true heroes.