Salem’s case reached its funding goal at the beginning of December thanks to many generous donors! The Big Hearts Fund is sponsoring Salem’s monthly medication to help manage her chronic heart disease.

The following was written by Salem’s owner, Michele:

Salem was born on July 18, 2003. Her mother was a munchkin cat and her father was an American Short hair. Salem is petite, and has the most loving nature. She licks my face, sleeps either next to me or on me, watches TV with me, “talks” to me (I am pretty sure that she can say “mom”), is there to comfort me when I cry, and helps me through the hard times when I don’t think that I can go on living-there she is, rubbing up against me, trying to lick my face and letting me know that she loves me and it will all be okay.

Almost 5 years ago this coming January, I was getting ready to go to work when I found Salem lying on the floor in front of the bathroom door. She wasn’t breathing right, and she looked up at me and meowed. I knew right then and there that something was wrong. I called into work and used a sick day, wrapped Salem up in a blanket, and rushed her to the family vet. He told me that he believed that she was in respiratory distress and needed to be put on oxygen right away. Since he didn’t have that equipment available, he told me where the nearest veterinary hospital was and I called them immediately. I rushed her to the Massachusetts Veterinary Referral Hospital. At the hospital, they were waiting for us. They took her immediately and rushed her into the back. She was put into a cage that pumped oxygen into it. I have never been so worried in all my life, as I was for her. After about an hour, the ER vet came out to talk to me. Her diagnosis was not good. Salem’s heart was enlarged, and her respiratory distress was due to being in Congestive Heart Failure. I had got her to the hospital just in time. I was given an option: I could bring her home where she would not last the night, or she could stay at the hospital where they could keep her on oxygen and keep giving her medications in her IV to get the built up fluid out of her which would get her out of respiratory distress.

I have never cried so hard or prayed to Saint Francis and Saint Jude as much as I did that day. To me, there was no decision to make-Salem was my baby and she was going to get whatever medical help she needed. I didn’t care if I had to sell everything I owned just to pay the vet bill—for all the unconditional love, companionship, acceptance and so many other things that Salem has given me just by being her wonderful self-there was no way on earth that we were going to give up without a fight. She would fight for me if she could, saving her life like she saved mine so many times was the least I could do. She was in the hospital for 3 days, and I can tell you, those were the longest 3 days of my life.

I knew all about Congestive Heart Failure—my mother had it for many years, and recently died from it. I knew that the long-term prognosis was not good and I knew that having heart disease, no matter if a human has it or an animal, is something that has no cure. But, Salem and I are lucky—we have a cardiologist, Dr. John MacGregor, that really cares about animals. He immediately put her on Lasix, Enicard, Taurine, 81 mg Aspirin, and Vetmedin. On her re-check, her heart had gone back to almost it’s normal size! Everyone was surprised! Salem is my miracle baby!

Well, as I said earlier, that was almost 5 years ago. At the beginning of September of this year, she went into respiratory distress again, and we went back to the animal ER. Her heart had become enlarged again and she was back in Congestive Heart Failure. She stayed overnight in the oxygen cage, with an IV in her. They managed to get the excess fluid out, but now she has to take more Lasix, which is a fluid pill. Dr. MacGregor and I are hoping and praying that she can give us a second miracle, and that her heart will go back to almost it’s normal size and she won’t have another attack for another 5 years! But, we are also realistic—we know that Salem is living on borrowed time and all we can do is keep fighting right along with her and I will fight for her no matter what. 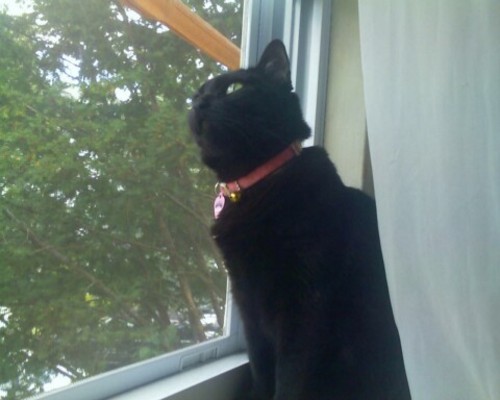 My mother taught me that when an animal you love dies, they stay with you in spirit until you need them and then their spirit goes into another animal who comes into your life to heal your broken heart. Well, that is what happened and how Salem came into my life. My dog Cuddles had just passed away on July 14, 2003 from a weak heart due to a long history of seizures. She was my baby. Salem was born 4 days after she passed. I have always believed that the spirit of Cuddles passed into Salem. From one angel came another-both my babies.

The Cardiology appointments can be a little expensive and her medications can be a little costly too. I don’t want to put her to sleep because I can’t afford to get her the medications she needs or the cardiology appointments that she MUST go to. No animal should have to suffer or die needlessly or be put to sleep because the owner can’t afford to pay for the treatment or medications. For all that animals give us, don’t they deserve a better fate?

All I would like is for Salem to live a long life, even if she has to be on medications for the rest of her life. She deserves that. She is my miracle angel girl.